Delivering the Best News to you!

I love food. Man, do I love food. But I usually only eat small portions of it. All day long, that is. So when I got to Austria and saw the gigantic portions there, I knew I had to adapt. Typical Austrian food is meant to keep active people going in the cold winter temperatures. After you’ve taken an hour or two to digest, I think that is.

Now, the portions of the food in Austria might have been a bit oversized for me, but I did eat some delicious things while I was there and I tried a whole range of new dishes to refill my energy levels after doing some winter activities.

Not all of these dishes were typically Austrian, but I do want to share them with you so that you can try them to on your Austrian holidays.

Breakfast is of the “continental” type, usually consisting of bread rolls with either jam or cold meats and cheese, accompanied by coffee, tea or juice. The midday meal was traditionally the main meal of the day, but in modern times as Austrians work longer hours further from home this is no longer the case. The main meal is now often taken in the evening.

A mid-morning or mid-afternoon snack of a slice of bread topped with cheese or ham is referred to as a Jause; a more substantial version akin to a British “ploughman’s lunch” is called a Brettljause after the wooden board on which it is traditionally served.

Kaiserschmarrn are the Austrian pancakes. They’re a bit thicker than pancakes and taste “eggier” or richer. They’re not big and round but cut into small pieces and covered in delicious powder sugar. Kaiserschmarrn are usually served with preserved or fresh fruits. I tasted mine with apple mousse. Yum!

I’ve also tried a more sophisticated version of Kaiserschmarrn once but must say I liked the original better. Want to try your hand at some Austrian desserts? Check out this cookbook with more than 400 recipes.

The first night I was in Austria, we went to this place where they served big chunks of ribs on slices of tree trunk – really! I’m not a big meat eater, but these ribs were simply amazing! They came with a simple salad and some fries, but I didn’t even touch the fries as -again – the portions were so huge and it felt like a waste to eat anything but the meat. I did have some salad, though. You know, to compensate. I still can’t pronounce this one! It’s traditional Austrian pasta that looks a bit like giant ravioli with three different fillings. I had spinach, pumpkin, and a delicious Austrian cheese. It was served with spring onions in a sauce of melted butter. Delicious, but heavy. Definitely not something you want to have when you’re on a diet!

I always thought dumplings were an Asian thing but turns out, Austria has its own version! Sturdy, flat cheese dumplings that are fried in a pan and sometimes also briefly put in the oven. You can have them with a salad or in a soup as I did. Just one of these babies will keep you filled for hours. Seriously. I rarely drink alcohol and don’t like the taste of it, so I was a bit wary of doing a Schnapps tasting. Now, Schnapps is definitely too strong for me (40% alcohol!), but I had a great time during the tasting because before we actually got to taste, we were given all these little bottles with scents and we had to guess what the scent was. So much fun!

Afterward, when we got our Schnapps, we also tried guessing what flavor it was and sometimes you could tell, but sometimes it was pretty hard. One time we got Schnapps that was the same flavor as one of the scents we’d smelled, but it didn’t smell anything like the scent. Pretty interesting.

Tiroler Gröstl was the first thing I ate when I arrived in Austria. I’d been traveling for almost 8 hours and was starving when we made it to our hotel, the Adeo Alpin in St Johann in Tirol. I needed a decent meal. Well, this pan with potatoes, bacon and an egg on top definitely was decent! I tried my best to finish it as it was so good but had to acknowledge defeat near the end. 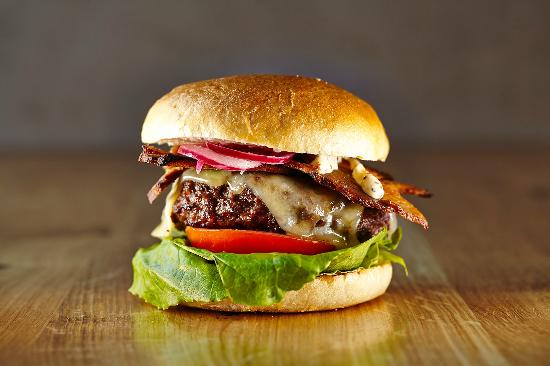 I know, I know, a hamburger isn’t traditional Austrian food, but sometimes you just crave something, you know? After three typically Austrian lunches and two typically Austrian dinners, I needed this and boy, was it good. The meat was amazing. Again, I’m not a meat eater, but this meat was juicy and tasteful and so delicious.

That’s it, I’m hungry now. I’ll let you ponder over these delicious foods while I go grab me a bite!